Is there anything cooler than an academic research paper that includes a graph describing the evolution of MTV’s international expansion through the years and gets a mention in the Freaknomics blog? 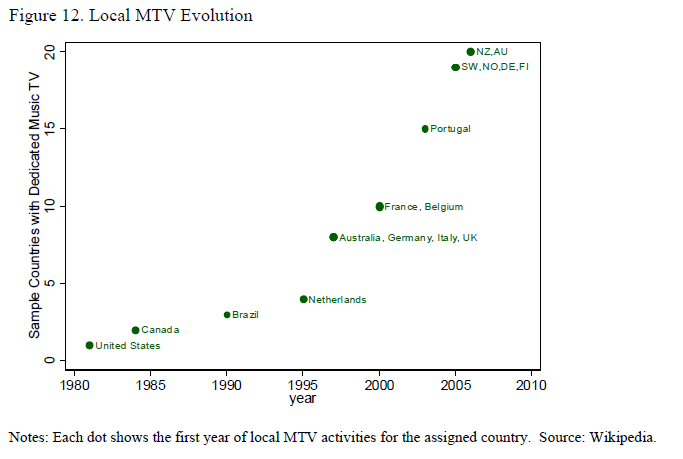 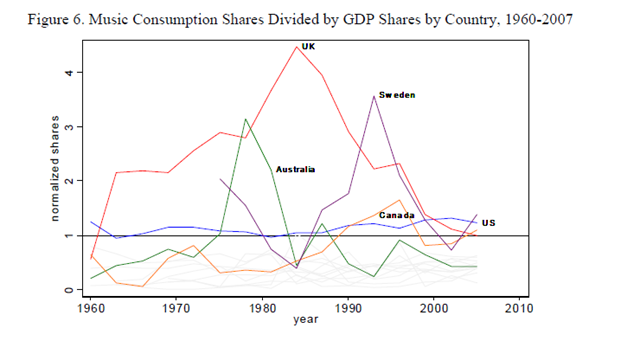 This table is great: artists to appear at least 18 major markets Too 100 charts since 2001:

Britney Spears are Evanescense the only ones to appear in all of the 22 covered markets in the same year. Eminem and Madonna appeared in 18+ charts in four different years. That is some serious international appeal in my book.

Using a new and novel dataset on trade in popular music among 22 countries over the past half century, we add to what’s known about cultural trade. First, despite popular and policymaker concern over large-country dominance, we find that repertoire shares of the world market – and of world trade – are roughly proportional to countries’ shares of world output. Second, despite this rough proportionality, consumers clearly prefer domestic repertoire over imported music. Third, imports favor repertoires from countries that are geographically closer and which share a language. These estimates for music – a traditional and important cultural service – resemble the patterns observed in bilateral trade of physical goods.

Fourth, despite rapid improvement in information and communication technologies over the past half century, the effects of distance and language have remained fairly constant. Fifth, perhaps surprisingly, the degree of home bias has increased sharply since the late 1990s. Sixth, we present evidence that this change occurs amid the adoption of the Internet, the regional splintering of MTV, and – in four of our countries – the growth of domestic radio airplay quotas. These results imply that concerns about technological change making music more easily available across places do not appear to threaten the popularity of domestic artists at home. Moreover, it indicates that countries imposing quotas or providing subsidies to local cultural industries may achieve their desired goals, as several countries have ramped up their governmental intervention in cultural markets recently, such as China, India and Brazil.

Overall, our findings suggest that concern about cultural domination by large economies – particularly the US – is misplaced for music. The US is the largest consumer and exporter of music, but relative to its GDP, the US share of world music trade is sixth behind Sweden, Canada, Finland, the UK, and New Zealand. We cannot extrapolate the same conclusion for other cultural goods, such as movies and TV programs. The production of music requires only a fraction of the fixed costs demanded in the movie industry, for example, and the distribution of movies and TV shows depend on other channels. Additional empirical research is necessary to gauge the potential effect of globalization on those goods.